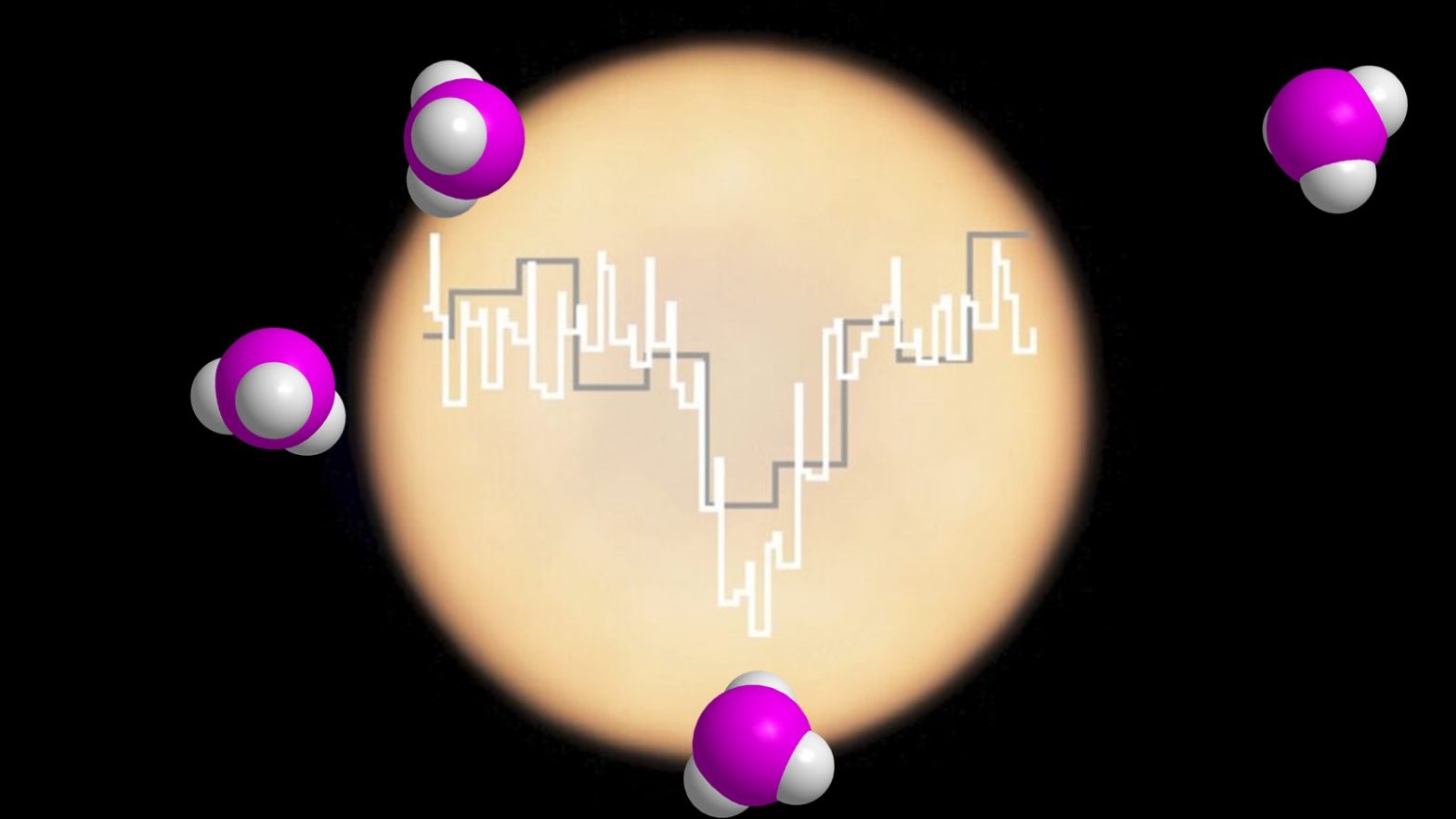 1.123mm phosphine absorption signal, on an image of Venus and phosphine molecules

Venus is Earth’s ‘Sister Planet’ – a bit smaller than Earth, a bit closer to the Sun. It’s bulk composition is probably pretty similar too, but its atmosphere is very different, with 95% carbon dioxide and 92 bars pressure at the surface (Earth’s atmosphere is 1 bar at the surface) generating a super-greenhouse that raises surface temperature to 430oC. The planet is permanently shrouded in what people call clouds but would better be called super-acid smog. As someone who studies life on other worlds, why my interest in Venus?

The idea that there might be life in the clouds has been around for decades. On September 14th 2020 a paper appeared in Nature Astronomy which described what is probably the most exciting scientific discovery of my career: the presence of phosphine on Venus. On Earth, phosphine is a gas made solely made by living organisms (or human industry – but if humans were not here then there would be no industry). Finding phosphine somewhere is a very strong hint that there is life there.

So – we have a connundrum – a sign of possible life in a place where there could not possibly be life. What’s going on? Laplace said “The weight of evidence for an extraordinary claim must be proportioned to its strangeness.” Carl Sagan popularised this idea in the phrase “Extraordinary claims require extraordinary evidence”, and there is little more extraordinary than the idea of life on a planet whose surface is 430oC, whose atmosphere has clouds of concentrated sulfuric acid, and which is 50x dryer than the driest place on Earth. So we have been spending the last 3 years trying to work out where phosphine could be coming from if not life. Volcanoes, lightning, meteorites, reactions between gases in the atmosphere, a whole list. These papers [1] [2] summarise some of this work – ~60,000 words of it so far.

So does this mean there is life on Venus? We do not know. There is still fierce debate about whether there is phosphine there at all. If there is, there is no satisfactory explanation for it, but that just says we do not know. Intriguingly there may be ammonia there too, and if there is we have suggested that it could make the clouds much more habitable than we thought. Could life be making ammonia too?

This is how science works. People find something odd. As Isaac Asimov may have said “The most exciting phrase to hear in science, the one that heralds new discoveries, is not “Eureka!”  but “That’s odd  …”. The possible presence of phosphine and ammonia in Venus atmosphere is odd to the max. My personal gut feel is that we will not find life in the clouds of Venus, but something really strange is going on there, and if there is even the tiniest chance it is life, surely that is exciting enough to follow up.

For the a lot more detail and the latest news on our work on Venus, see this blog.